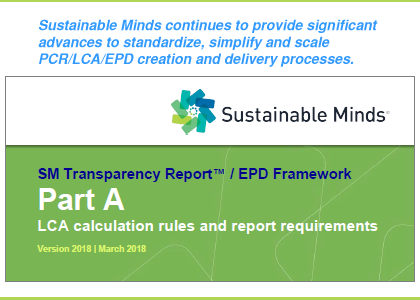 Now in its fifth annual release, the SM Transparency Report™ / EPD Framework Part A 2018 has integrated key rulings from the new ISO 21930:2017, as determined by the SM Technical Advisory Board (TAB) and public comments.

What is ISO 21930 and why is it important? ISO 21930: Sustainability in buildings and civil engineering works – Core rules for environmental product declarations of construction products and services is one of the primary standards for product category rule (PCR), life cycle assessment (LCA), and Type III environmental declaration development for building materials. It is specifically named in LEED v4 as one of the two standards for creating conformant Type III environmental declarations. Outside of Europe, this international standard (ISO 21930) is more likely to be used than the European standard (EN 15804), as it applies internationally.

The Sustainable Minds technical program was created from the ground up as a North American program, has always been LEED v4 conformant (follows EN 15804), and now integrates the elements of ISO 21930 most applicable to the North American market.

To evaluate ISO 21930:2017 for the North American market, in an October 2017 webinar Doug Mazeffa (Sherwin-Williams) gave an overview of the updates in the new 2017 version and addressed the implications for creating PCRs and Type III environmental declarations. The takeaway from this webinar was that this update provides significant and useful language and rulings to integrate with SM Part A 2018. ISO 21930:2017 adopts the EN 15804 life cycle stage information module reporting and then provides much more detail, including very specific guidance for critical areas of LCA. Since this new version is more aligned with EN 15804 than in the past, PCRs that already follow EN 15804 will not require dramatic changes.

What elements were determined to be inapplicable to the North American market?

Type III environmental declarations in North America are getting used differently than in Europe and internationally. In North America, architecture, engineering, and construction professionals are using them to understand the product’s life cycle impacts to help inform greener selection decisions. In Europe, they are used for green public procurement and have been developed primarily to be used in business-to-business communication.

For these reasons, the TAB identified elements of ISO 21930:2017 that would not be required for PCRs and Type III environmental declarations created for the North American market, as the LCA content would not contribute meaningful information to a non-technical reader to inform decisions. These requirements can optionally be included and are found in the SM Part A ISO 21930:2017 compatibility appendix. Part A compatibility appendices are designed to enable full conformance to international standards when a PCR committee determines that the LCA and/or Type III environmental declaration must be 100% conformant. The rules in this compatibility appendix include:

ALSO new in SM Part A 2018 in response to comments from the SM TAB and the public:

Sustainable Minds is proud to introduce Part A 2018 and as always, we invite ongoing comments on Part A. Review is always open. Download the comment form and return to tab@sustainableminds.com.